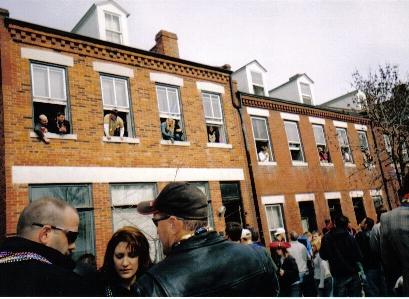 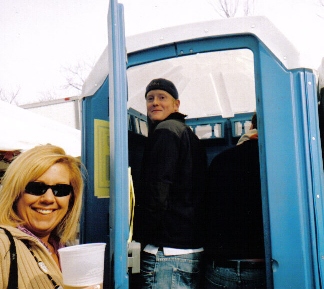 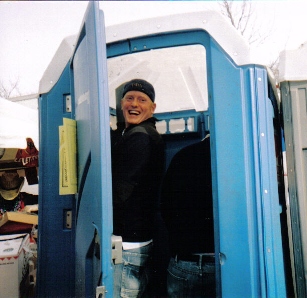 Here’s some pictures from Saturday… these were taken early in the day, before the only thing that a shorty like me could see was the back of Tony’s sweater. Check out how Tony and Peter helped speed along the porta potty line. Thanks, guys. And thanks, lady who opened the door.

The Mardi Gras in St. Louis (or the Soulard neighborhood, to be more exact) is the second largest Mardi Gras party in the country.

Well, hopefully we’re still second. On the news this morning, they showed a lot of people partying in New Orleans, and it was really nice to see everyone happy and having a good time.

I’d never been to Mardi Gras before, and I’ve made my feelings about it quite clear. However, I had heard that some of the proceeds would go to the victims of Katrina. So I, Stephanie, philanthropist and friend to humanity, decided to attend my very first Mardi Gras and contribute to the relief efforts… over and over and over again.

Seven of the frat boys and I went down there together, and I was honestly shocked by the size of the crowd, and of Soulard itself. There were blocks and blocks and blocks of parties and tents and balconies and people. I’ve heard that anywhere from 500,000 to 1.2 million people showed up, although there’s really no way to tell.

I was scared that I would lose all of my boys in the crowd, but being the only girl of the group has its advantages… I’d just park them in front of a balcony full of potential boobies, run off to get a refill or do my business, and I’d return to find them in the exact same spot (most likely with the exact facial expressions, with their beers still frozen mid-sip… men are hilarious).

After a day of mayhem, I went home to take a nap (!), and then we met up later at Ice & Fuel. There were about 30 of my friends, and maybe 15 other customers (who we all kind of knew anyway), so we took the place over and it felt just like back in the day. So I have to say, my first Mardi Gras was a success.

And no, I didn’t flash anybody. Are you kidding?

Also! The Takedown has two more shows – April 1 and April 21. Then they’ll be in Chicago! Go Go Go!

Ever since my relationship with Hippy Timmy (who taught me anything and everything about the Beatles, which alone made it fantastic) I’ve had a personal rule about the song “Imagine”. Whenever I hear it, I have to say or do something nice, usually to the first person I see. I figure that’s something John would have wanted.

When I was in London, something awful happened back in the States, and the entire world freaked out. London set out on a mission of love and peace and support… so naturally, we heard John Lennon everywhere we went.

I was shocked by the amount of homeless people I saw in London. I’d see three or four just on the walk from my school to the tube, and I never really got used to it. But there were regulars… like the guy with the dog outside the grocery store on Baker Street or the lady holding a baby at the McDonald’s on Edgeware.

But the man who totally blew my mind was Recorder Guy. I’d pass by him every day, this grown man who was forced to survive by playing “Greensleeves” on the recorder all day long. I mean, most of us learned how to do that when we were kids, and it’s scary to think that he’s forced to rely on that skill to live.

So one day, I was walking by the grocery store with Little Mom, and the store was blaring “Imagine” with all of the doors propped open. I opened my mouth to say something nice to her, but then I saw Recorder Guy. I reached into my pocket, felt around, and threw what I found into his hat. It turned out to be a ten or twenty pound note. I didn’t really look. It was all I had, so it was his. Never underestimate the power of the Imagine Rule.

After his reaction, which I’ll never forget, Little Mom and I started to walk away and she whispered, “Did you mean to do that?”

“It’s just this thing I have with “Imagine”, I explained, and as we made our way down the street I told her about my rule.

A couple of weeks later, I was walking down Baker Street and I heard the familiar melody of “Greensleaves” floating through the air. I searched through the crowd for Recorder Guy, and right as I spotted him, he glanced over at me and fumbled to change his tune.

And then I heard it… even though the pitch was off and he missed a few notes, he was playing my song. Our song. Recorder Guy had taught himself how to play “Imagine”.

I should a bit miffed that he learned how to “beat the system”, but it totally made my day. I made sure to stop by his hat whenever possible for the rest of my time in London, and it was worth every single pence.

Today is Random Acts of Kindness Day. So I want you all to pretend that you just heard “Imagine” and do something nice for the first person you see after you read this. It’s amazing how much a kind act for someone else can do so much for you, too.

* And YES, I know that Paul said this. But John and Paul always did work well together, for the most part. So.

Up until four years ago, the Superbowl always coincided with my birthday. So before they moved it back a week, it was less about football and more about opening my presents, getting free drinks, and celebrating in general.

And although the past few Superbowls have been fun (especially the ones at Jen & Ron’s, because Jen & Ron parties always rule), they’ve mainly consisted of people being hypnotized by the TV and trading stats and Madden and who’s coach is better and zzzzzzzzzzz. This year was cool because I got to watch the Superbowl with musicians. So rather than being all about football, we mostly talked about The Clash and Zeppelin and Weezer and the superiority of McCartney’s Superbowl performance to The Stones.

I’ve been trying to finagle my way into the band (which has had various names and various members, but always includes Warren) for the past ten years… I’m kind of the Lucy to their Desi. They don’t seem too interested in employing my talents, but that’s not going to stop me from punctuating every sentence with (cough)harmonica(cough).

So even though I’m not in the band (YET), it was nice to relax and listen to great music and talk about great music and songwriting, as opposed to sitting around watching a bunch of neanderthals scream at the TV for four hours.

Speaking of neanderthals, how hilarious was that FedEx commercial? The Superbowl is a really fun time to work in advertising, because it’s pretty much the only time of the year that everyone else is genuinely excited about it, too.

So yeah… great Superbowl, and it’s only 90% because of the awesome music and my even awesomer friends. It’s also because of the food fight, robots, little weenies galore, the Tony vs. Sarah wrestling smackdown, catching up with a dear old friend (and meeting his girlfriend, who was really nice), and hiding in the pantry, which gave me an excuse to sing Trapped in the Closet without being completely non sequitur.

And to everyone else (at least the people in STL): come see The Takedown at the Hi-Pointe on Friday!! I guarantee you’ll dig it!