Peas On My Knees

Him: God, this is incredible.

Him: It’s like massaging my knee. It fits on it perfectly. SO much better than the bottle of rum.

Me: Dude, frozen peas are the best. I told you.

Him: So how long am I supposed to do this?

Me: Well, they say you should ice it down for about 20 minutes, but you’re wearing jeans so –

Me: You know, sites about knee injuries and stuff.

Him: That’s so awesome. Did they say to get the kind with onions, or…

Him: You know, a particular brand?

Me: It wasn’t specifically about peas, man. Just ice.

Him: Oooo-ooooh. (Proceeds to die laughing with me.)

Strep Up 2 The Streets

That’s right girlfriends. My tonsils are fighting off sickness and losing terribly.

Jason, for the Cheesecake Pudding he just handed me.

You guys don’t even know…

how great it feels…

to be me this very second.

(It’s pretty sweet. Be jealous, or better yet, try to top it. You deserve it.)

Some guy just freaked out at Kirkwood City Hall and shot up a meeting. 7 people were shot. 5 are confirmed dead including two police officers.

Our Mayor was shot IN THE HEAD and is in the hospital.

I passed by City Hall on the way home from Jen and Ron’s and there were at least 40 police cars. All the surrounding roads are blocked off. I live literally 3 blocks from City Hall, and I can hear several helicopters outside as I’m typing this.

Kirkwood is like a big family; everyone was rushing downtown to figure stuff out and help.

Thank you to Rob R. for the heads up – I would have freaked out if I drove past that and didn’t know what happened.

EDITED TO SAY: I love how the reporters were all frantic and distraught and people from Kirkwood were practically consoling THEM.

They kept asking “Can this town move on? Will Kirkwood ever be the same???” And every resident they asked would roll their eyes and say, “Of course. This was just one dude. This was just a bad day. Of course we’ll be fine.”

Finally, they stopped asking. Media blitzs are the stupidest.

I am writing this update in the morning and there are still helicopters.

Well, the day has finally arrived – we found out how he died. I’m not going to lie: I was pretty anxious to learn what happened. For once, it’s not because of that side of me that reads US Weekly and watches Rock of Love. I was personally invested in this because Heath Ledger had raging insomnia like me (or perhaps worse, as I have never channeled a psychotic clown or tried to raise a toddler).

Three of the pills that they found in his room (Ambien, Lunesta and Lorazapam) are the three pills that I take to sleep, and I’ve grown accustomed to mixing them in order to make them work. You guys, when you can’t sleep, it’s so easy to throw pill after pill into the mix – with booze – when none of them are working. The fact that he could take TWO Ambiens and wake up after an hour shocks me and breaks my heart, because staying awake on one Ambien is scary enough.

Those aren’t the pills that killed him, though. And now that we’ve mourned and we know what killed him, this blog entry is already so five minutes ago. So I’d like to segue this into a tribute to one of my favorite movies of all time, 10 Things I Hate About You. Sure, it’s his breakout movie and he’s amazing, but there’s so much more to it. They have been playing this nonstop on cable and you’ve probably been ignoring it, but I’d like to throw out a few reasons why you should give it a shot. 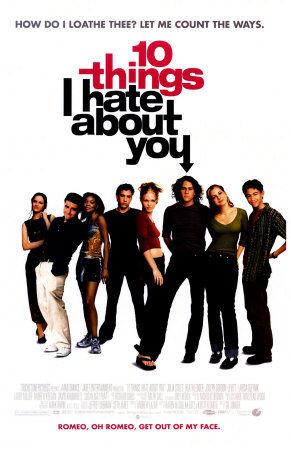 10. It’s a modern day adaptation of The Taming of the Shrew. That’s Bill Shakespeare, kids. Now you can feel smarter for watching it (unlike Step Up 2: The Streets, which I will watch just because I LOVE a good breakdance movie).

9. Andrew Keegan at his smarmiest. This guy cheated on Leann Rimes, was in Camp Nowhere AND has my birthday, so I’m automatically a fan.

8. A brief 10-second clip of my favorite season of The Real World (Seattle), staring my favorite Real Worlder (Boston David). FUN FACT: The clip they show is a pre-show interview with him and Nathan at VMI. Nathan and David are the only two cast members who were friends before the show began, which is why they couldn’t say the phrase “seven strangers” in the opening credits for their season. Ask me about The Brady Bunch next.

7. Allison Janney as the school counselor. In every scene, she’s at a computer (maybe even a typewriter? It was the 90’s) working on a romance novel, and everything that comes out of her mouth is filthy and innappropriate and hilarious.

6. Larisa Oleynik, who played FREAKING ALEX MACK back in the day. I have been a superhero junkie since always, and The Secret World of Alex Mack ROCKED! It was perhaps my favorite SNICK show. Here is a montage of her superpowers and fantastic hats:

4. F*#KING LETTERS TO CLEO singing on the roof during the closing credits. “Here and Now” was MY JAM back in the day.

3. My favorite actor David Krumholz, waking up after a party: “I have a dick on my face, don’t I.”

2. Every teen movie has its climax at the prom, and every prom needs a great band. This prom happens to feature my FAVORITE band from high school, Save Ferris. In the summer of 1998, I had a stretch of insomnia so bad that I stayed awake for 3 days. But I loved Save Ferris so much that on day 4 I ate No-Doz all day instead of trying to sleep just so I could see them at Warped Tour. I got a t-shirt signed by T-Bone Willy and Jose Castellanos, and I swear to god Mo pointed at me. MAN that was a fun time. When are the kids bringing ska back? I miss ska.

1. Number one is a tie between two of my favorite scenes (and NO, they are not of Heath Ledger singing, although that was pretty sweet). First up is the paintball kiss that makes me want to run around and kiss boys all day long:

And the other scene is the one where Julia Stiles reads her poem. I remember seeing this in the theater, and between Heath’s intense stare and the moment Julia starts crying mid-sentence, I was blown away. I know it’s supposed to just be a silly teen movie, but during this scene I was very aware that this was incredible acting and I would be seeing these kids a lot more in the future.

“And Both Babies? Are Amaaaaaaazing!”

I have an unhealthy obsession with pop culture, but there are a few things that gross me out. Guilty pleasures are only okay if you draw the line somewhere, and I draw it at celebrity babies.

When did we let this happen? When did celebrity babies become more popular than their parents? Why are there 4-page spreads dedicated to Suri Cruise’s outfits? When did “A Day in the Life of Shiloh Jolie-Pitt” become worthy of a magazine cover story?

Sure, Kingston Stefani-Rossdale and Maddox are both hip, hip dudes. And Violet Affleck is precious. Hell, Nicole Richie’s baby is already cooler than we will ever be and she’s what, a week old?

But you know what happens to celebrity babies? They grow up and become the Olsen twins. Or: Rumer Willis. You think Paris Hilton is a narcissistic B? These kids have articles on the AP wire detailing their potty training. Everything from the initial “bump watch” to their 21st birthday is front page news. Do they even have a chance to grow up normal?

Here is why I’m bringing all of this up: there are three celebrity babies that I want to know about. Just three. And everybody – including you – wants the dirt on their lives.

These kids are fascinating for millions of reasons, but mainly they’re interesting because we know nothing about them. They don’t have cameras in their face 24/7. We didn’t get to tour their nursery in US Weekly. Hell, up until yesterday I had never seen their faces. That’s right:

YOU GUYS!!! IT’S PRINCE MICHAEL AND PARIS JACKSON!! JUST WALKING AROUND ALL NORMAL!! WITHOUT BLANKETS ON THEIR HEADS!! WHAT IS GOING ON???

Jackson kid-sightings are as rare as a unicorn, so you’re welcome for posting that. These kids live in Dubai, where they have skiing in the desert and a man-made island shaped like a palm tree just for the hell of it. Not to mention you-know-who for a dad, a little brother named Blanket and the Elephant Man bones as a godfather.

I know nothing about their lives but I can guarantee that it’s CRAZY and I have been waiting for these kids to write a tell-all memoir since the day they were born. The fact that they are walking around in public brings me one step closer to knowing the truth and I am ecstatic that this will happen in my lifetime.

Meanwhile, Adam and Jaime recently gave me this: