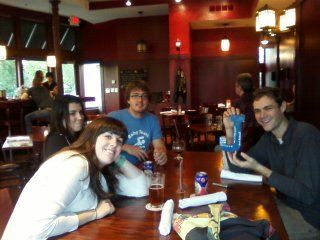 Actually, it’s for Jeopardy! RØB is currently taping episodes (!) so many Squids randomly stopped by to sign a big J and some other stuff before he left. Someone made a giant Trebek head. The Squids do not disapoint. Also: Janterenet!

I don’t mean to get braggy, but I can’t believe how hot my boyfriend is or how adorable my friends are. It blows my mind sometimes.

I will brag about the delicious burger I had at the pictured-above Newstead Tower Public House. I had never been; it was nicer than I imagined. Last night I went to the Hideaway for the first time – just as dive-y than I imagined. The wood paneling and porny paintings were a nice touch.

There are rumors a dead body was found in a bar in South City but I won’t say where in case you’re not supposed to say that. As you can tell, I’m still earning all my city badges.