A Patron Saint of Life As I Know It

When I first started public school, I hated the bus. It was loud and crazy and everyone was an asshole – basically a nightmare for any shy kid – especially one who got bullied like me.

I did look forward to my bus stop for two reasons: Courtney and her little brother Mike. They were both so warm and hilarious. I had a faint memory of playing in her yard as a kid, so they felt familiar and safe. The bus was hell and school was hell, but it was nice having such pleasent bookends on my day.

In high school, Courtney hung out with the cool, freaky, alternative (back when that meant amazing) kids. They smoked and drank. The girls dressed so rad and all the guys were hot and MAN, I wanted to hang out with them!

She worked at McDonald’s with me. Ra and I agreed that she was the most fun to work with. Sometimes she would walk home from school with Rachel and I, and it made us feel like the shit. She showed us a shortcut through Tyler’s backyard, before I knew Tyler or dated his best friend. She told wild stories about her friends. She gave sage advice about love and heartbreak. We smoked lots of cigarettes. Those were great walks.

Any time I saw Courtney at school, she was with a girl with long, pretty red hair. I remembered her well because one time, she dyed her hair black and it was so cool to see someone with bright red roots.

Fast forward FOUR YEARS. I’m sitting in a conference room in Webster University. It was orientation for the semester in London. I was still shy, still scared, and full of questions. Suddenly, someone raised their hand.

“How are we going to find the school from the airport?” She asked. “Are their tour guides? Can I have a map? Are you just going to drop us there?”

“I like this chick already,” I thought, and I peered around the table. It was Courtney’s friend with the red hair! After orientation, I sprinted over to her.

“You went to Kirkwood! You know Courtney! I know Courtney! Wow!” I spazzed. I’m sure she was equally as terrified awed by me. We exchanged information and maybe-sorta’d that we’d keep in touch.

A couple of weeks later, I emailed her and asked if she wanted to stick together at the airport and find the school together. And we did. And then we ended up living down the hall from each other in the dorms. And that’s how Jen became one of my best friends in the world.

She would tell crazy stories about her friends, some of which I had already heard. She was still new and interesting like everyone else, but she knew all the places and people that I did. She was the perfect amount of home.

She introduced me to the Jersey boys and later, her now-husband and all of their friends. When I broke up with Brian, that group basically adopted me. Jen introduced me to my first roommate, 3 guys I dated, a huge chunk of my current friends, world records, camping trips, and 5 years of incredibly fun weekends.

And Courtney unwittingly introduced me to Jen. So in a way, Courtney is indirectly responsible for so many parts of my life, and I wouldn’t trade any of it (except maybe the guys I dated).

Oh! Also! About a year ago, I was stalking Courtney’s Myspace page looking for more cool kids I knew. I clicked on one girl’s picture. She had bright pretty red hair, too. She was at a wedding, standing next to the bride… who happened to be my best friend at work. “I was at that wedding!” I thought. “I like this chick already, too!” Then I started reading Erin’s blog. And the rest is history.

Last night a bunch of friends gathered at Friendly’s for Niki’s 30th, and to my surprise, Courtney was there – all the way from Seattle! We gushed about each other’s dates, laughed and dished with Jen and Erin, and it was the most fun I’ve had in a while.

Also, Erin , Courtney and I gushed about each other’s blogs. Hilarious!

So Courtney, now you know how great you are, in case you didn’t already know. Thanks for being so cool, having such great taste in people, and unknowingly changing my life for the better. 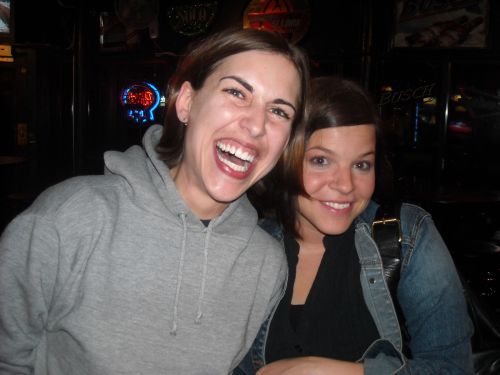