So that creepy X-ray of my skull? It’s going to cost me $400, ON TOP of my $2,000 surgery. Let’s not forget that I’m spending almost $600 on my cousin’s SECOND wedding (with NINE bridesmaids).  And I still haven’t made it to the Y and people still keep making me go to mandatory meals where I have to eat total shit and Justin makes me go car shopping with him every day AND I’ve been working 12 hour days all week AND I THOUGHT TODAY WAS FRIDAY AND IT’S NOT SON OF A BITCH.

I’m just going through serious endorphin withdrawal and feeling some major anger toward someone that I haven’t been mad at in years and I’m too tired for this shit and clearly I’m sort of having a nervous breakdown right now is all. You know I mean business when words are in italics.

I will end this happily with pictures of our anniversary getaway, where we drank Ed Hardy wine (only until it stopped being funny, then I switched to Toad Hollow) and ate brie and watched The Other Sister on VHS and sat in a jacuzzi and slept in the clouds and ate breakfast served by a British lady in a dining room then went on a breezy morning walk in a neighborhood full of gorgeous mansions. THIS WEEK SUCKS I MISS LAST WEEK YOU GUYS

I went to the Kurt Vonnegut Memorial Library in Indianapolis! I would say, “and now I can die happy,” but Nate just told me that he bummed a Pall Mall off of KV in 2003 AAGGGHHHHH

I’ve listened to this about 20 times now; she is amazing!

SO it’s anniversary road trip time. Peace out, chumps. We’re stopping by the Kurt Vonnegut Museum on the way!! 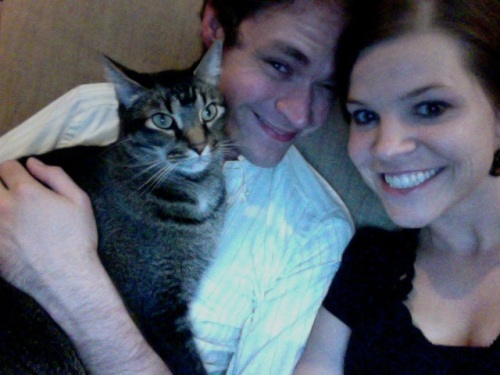 Oh P.S., in addition to the prettiest roses ever: 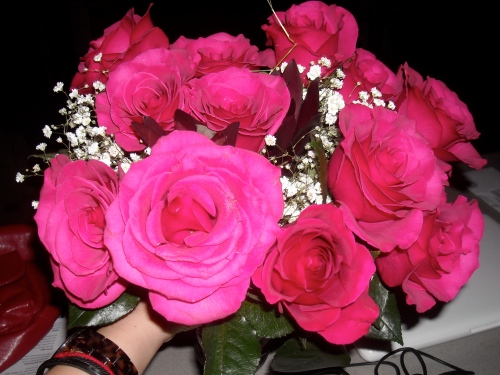 … Justin got me an awesome poster from The Room signed by Tommy Wiseau and Greg Sestero! “Anything for my princess!”

Justin’s film premieres tonight at the Tivoli! It’s at 9:30, though his will play toward the end and we’ll have a giant screening party when he finishes the longer version, so don’t worry if you can’t make it. (I think he finds the $12 ticket price a little embarrassing.)

His mom’s side is in town this weekend and his dad is coming later today, which means we have or will be hitting up every single cool restaurant/bar in my neighborhood this weekend. Rooster, Crown Candy, Blueberry Hill, Rosalita’s, Broadway Oyster Bar, Soulard Market, etc. They were even spoiled rotten by now-famous Dustin at Sub Zero.

We went to Lola for the first time for our anniversary and it was delicious. We also have the Closing Night Awards Party this week, then we’re going away next weekend for a belated anniversary trip. And did I mention last week was our traditional BLT Week featuring giant Indiana tomatoes and corn on the cob?

A Sequence In Time Repeated

“Many things–such as loving, going to sleep, or behaving unaffectedly–are done worst when we try hardest to do them.”

Today marks one year since I’ve taken a sleeping pill, or at least a prescription one anyway. I still take melatonin and the occasional Benadryl, but no Ativan and more importantly, no Ambien. For someone like me, this is huge.

I was addicted to Ambien for over 5 years. It started right around the time I went through an awful break-up, so it immediately became an escape for me. I was was prescribed Ambien because I was diagnosed with chronic insomnia, but I still couldn’t sleep because I was treating a condition that I didn’t have. What I really had was a little-known condition called Delayed Sleep Phase Syndrome. That means Ambien doesn’t affect me the same way it affects other people. I usually stayed awake for a few hours after taking it. END_OF_DOCUMENT_TOKEN_TO_BE_REPLACED

We’ll Try And Make It Ours

Today is our two year anniversary! I still get flashbacks to those first few weeks of crushin’ when I hear this song:

Remember that bridesmaid dress I ordered in a size too small? YUP, it fits. In fact, it’s almost a size too big.

I’ve lost 25 pounds so far this year, which isn’t a lot unless you realize how many times I get taken out to lunch at work. But people are noticing. Last weekend, Justin and I visited a few of our neighbors during City-Wide Open Studios, and we realized we live above a former Project Runway contestant. 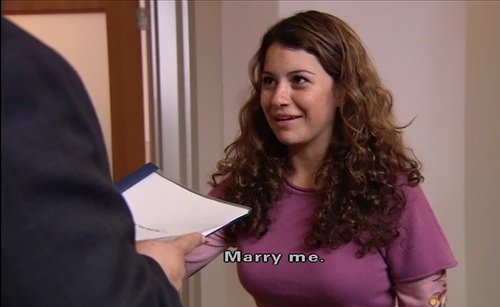 So needless to say, a huge weight has been lifted off my shoulders (and stomach and thighs and ass) and I’m feeling pretty relieved today. And confident. And hungry. So if you’ll excuse me.