I’ve never been a big moody music fan (I like it, I just won’t pick it over fun stuff) but I recently started playing Sigur Rós while I write. The first time I gave them a serious listen, I started crying. It’s exactly what Iceland feels like. Exactly.
Mood Music!

.
After our adventures at Skógar, we headed to Vík, a black sand beach! 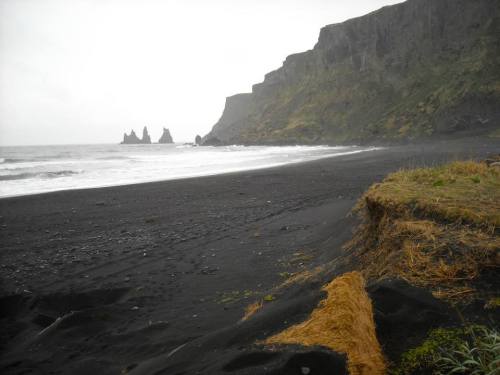 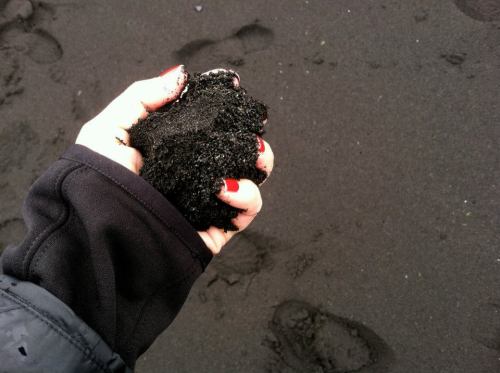 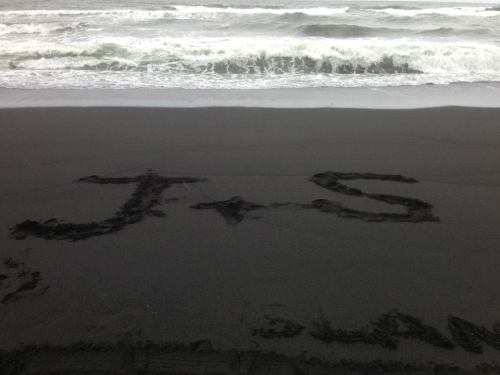 We pulled into a pretty remote parking lot to park, and guess who was right behind us? 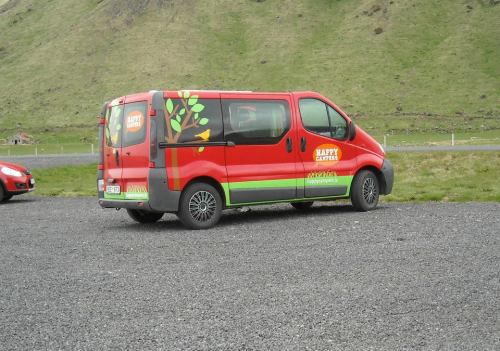 Needless to say, we fled soon after. Even though Reynisfjara Beach is just on the other side of that cliff in the first picture, we had to drive about 10 minutes to get there. Instead of black sand, we were greeted with smooth rocks! 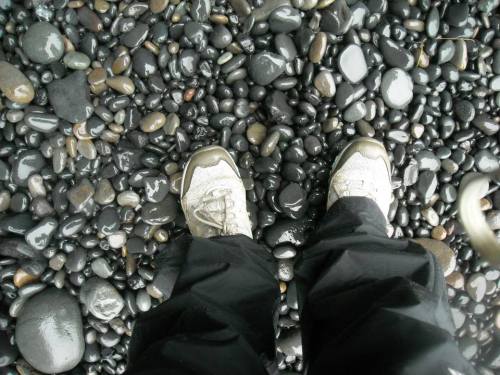 The closer you got to the water, the smaller the rocks became. I could make a million dollars selling bags of this at Pier One: 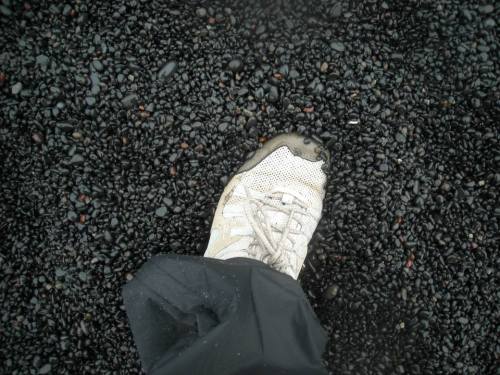 The rocks were so weird to walk on! It was incredibly zen. The coolest part was when the tide came in. Instead of retreating back out to sea, the water would roll in and then immediately sink into the rocks, leaving a little foam outline as it vanished. I could have watched it forever. 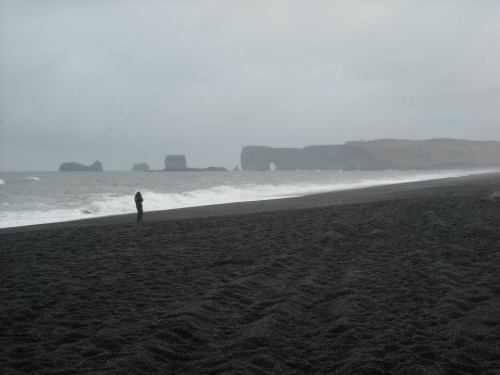 Reynisfjara is also home to a huge, gorgeous cave called Halsanefshellir and the famous Basalt columns. 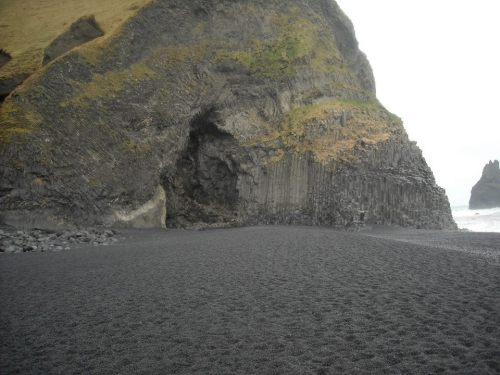 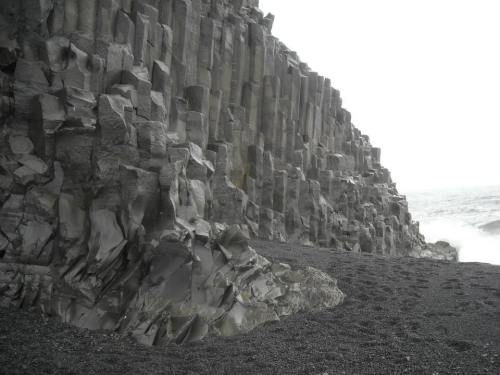 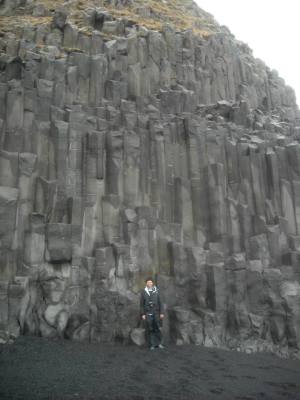 Here’s Justin standing in the cave for scale: 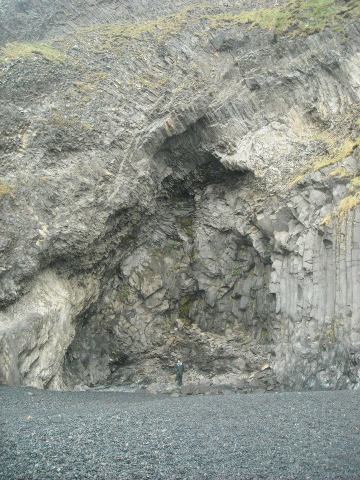 Our stalker pulled up just as we were leaving. I think we lost him here, unless he’s hiding in my treehouse as I type this.

Our first stop of the day was supposed to be another waterfall, but it was raining very hard when we arrived. Justin was incredibly sad about it, so I said, “When we pass it on the way back, the sun will be out and there will be a rainbow.” AND GUESS WHAT. 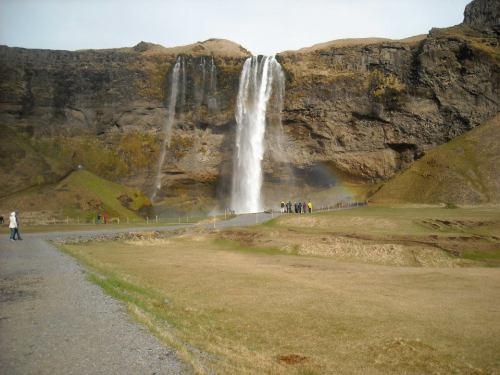 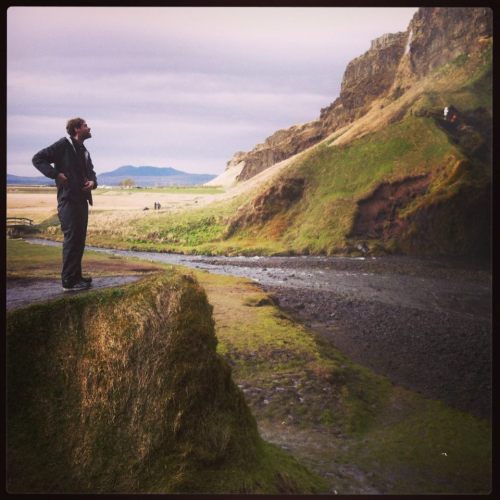 Seljalandsfoss is one of the most well-known waterfalls in Iceland because you can walk behind it! 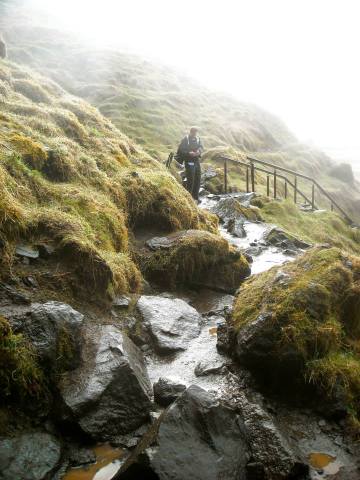 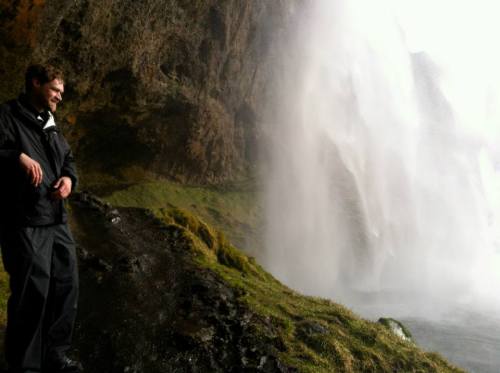 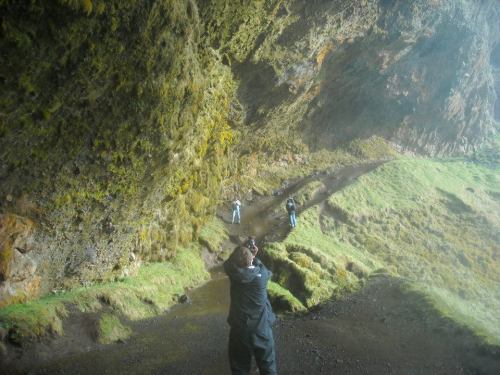 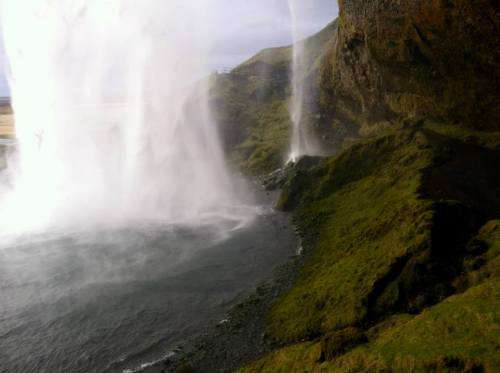 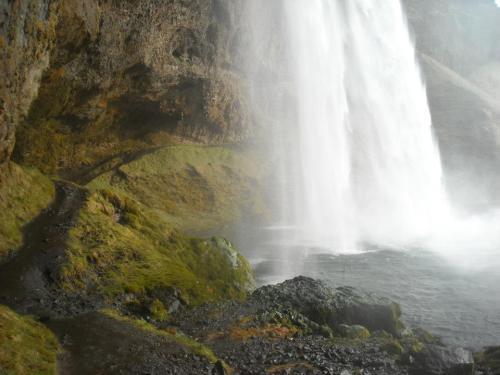 Here’s another rainbow. You had to climb up this insane pile of wet rocks to get back to the path. I was so relieved when I reached the top of this that I started laughing like Sloth from Goonies. 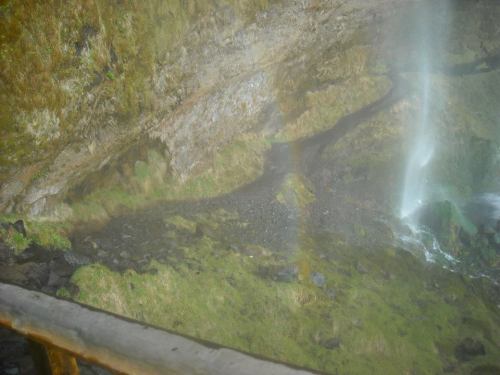 Finally, we went to our hotel… but the adventures were not over! Hotel Rangá is awesome! It’s the only 4-star resort in Southern Iceland. 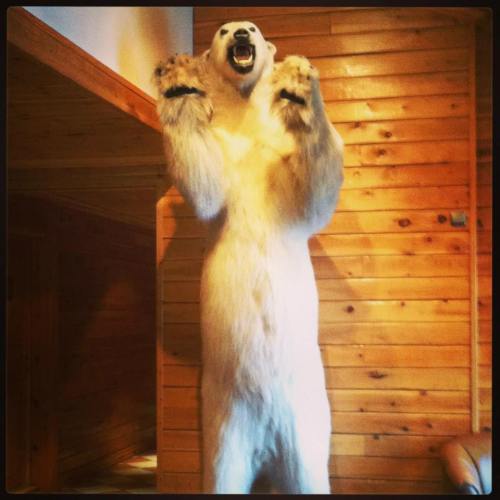 The hotel felt like the Great Northern from Twin Peaks, which was appropriate considering how we met. There was even a backwards “Laura” on the rug in our room. Creepy! 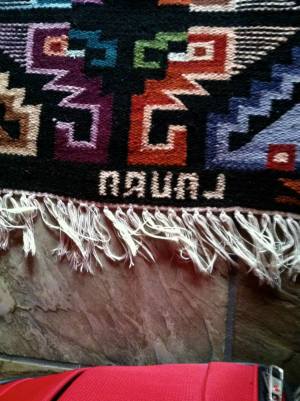 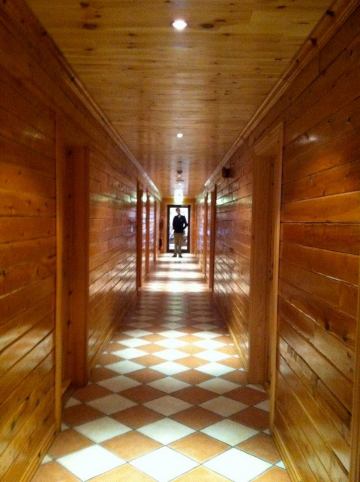 We think that the tour company told Rangá that we were on our honeymoon, because we were surprised with an upgraded suite! 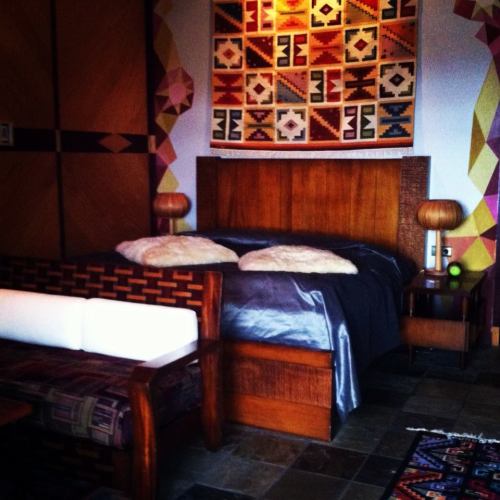 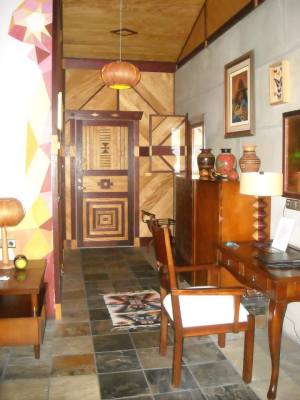 This was the view from our balcony. Every room has a balcony or a patio because when the Northern Lights happen, the hotel will give you a wake-up call. 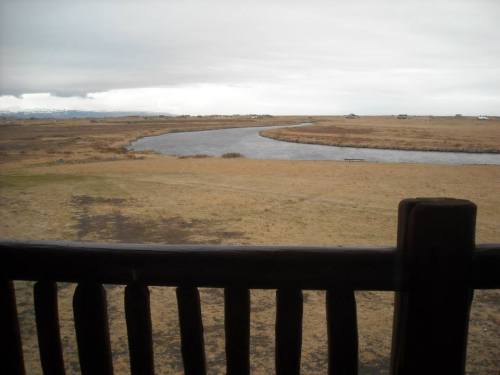 The game room was also stellar: 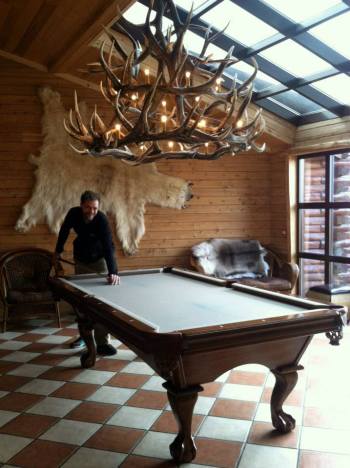 We loved this puzzle so much that we bought a poster version of it in Rekjavík. 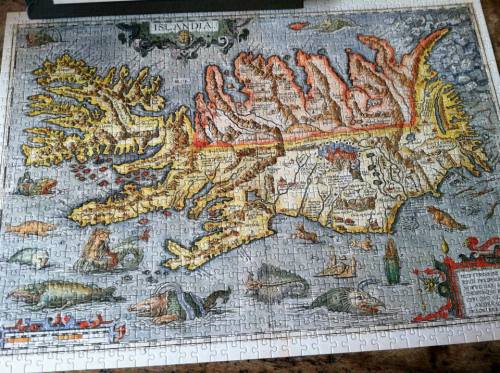 FEATURED FOOD: We ate a 4-course dinner, sitting right next to the window, but the restaurant was really fancy and I didn’t want to be tacky by taking pictures. (This was like the only time I didn’t wear my awesome hat on the trip.) However, I am 99% positive that lamb was involved. I ate lamb almost every day. So here’s a picture of a dope lamb kabob that I ate a few days earlier. 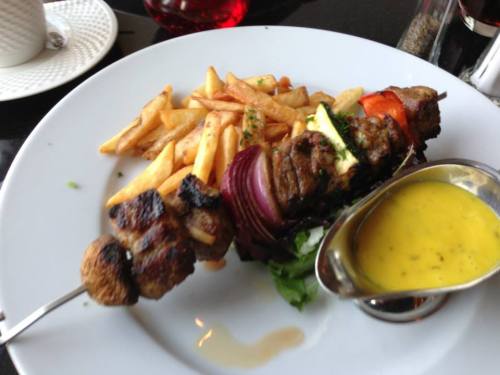 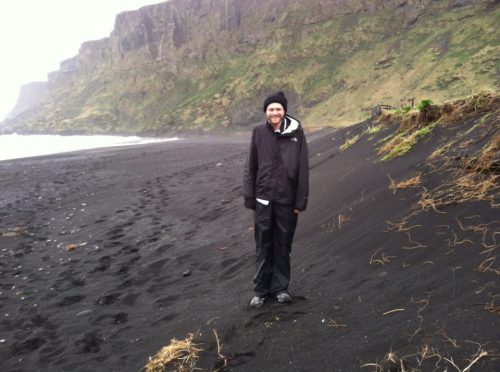