It took a shit-show election, virtual Kindergarten, Halloween, Thanksgiving, Christmas, New Years and a motherfucking coup, but ya girl is baaaa-aaaack.

So, I (mostly) quit drinking. And (mostly) added sugar. And (unless there’s a coup or PMS involved), pigging out at night. AAAAAND: 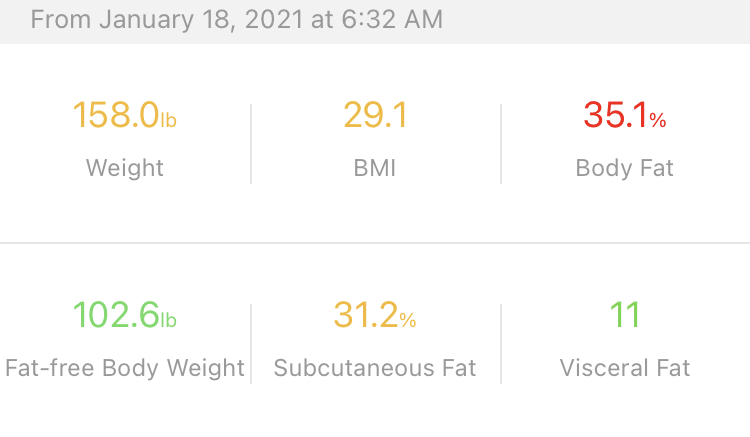 10.6 pounds since the last time we talked! That’s not bad, right? I actually went back up to 174, then kicked my ass into gear in December. I figured that instead of waiting for New Year’s Resolutions, I could take advantage of a month without work parties and family travel. And I lost like 11 pounds!

While I didn’t achieve all of my NYR from last year (which is fine, because: fucking pandemic), I DID achieve the biggest one: working out every day for a year!! Okay, I missed two days in the very beginning, but on January 8, I hit 365 days in a row. And I’m still going!

My NYR this year is to do one MasterClass per month. And I already finished the one for this month. Woo! Someday I’ll get back to writing here every day. Maybe when I hit a weight where I’m satisfied.

I’m now in the weight range that I was the last time I did Mortified Monday. For the last 6 years, I’ve looked back at those scale pictures and laughed at how fat I thought I was, and how long it took for me to go down 10 pounds. I actually don’t remember what I weighed when I got married. But I’m pretty confident I’ll get there.

This week involves some massive work deadlines, an inauguration (and potential terror attack) and the last full week of my thirties. So we’ll see how well I actually do. But after a week or so of screw-ups and a big LOL, this felt so good and I just had to share!

P.S. While we all know the BMI is fucking horseshoe, I was SO excited to finally be in the “overweight” range instead of “obese” (I wear Size 10 pants and was considered obese). UNTIL, that is, I learned that I’m no longer in Phase 2 for the vaccine rollout. Agh!